Olakunle Churchill opens up in a recent interview with Azuka Ogujiuba where he said he wasn’t bothered about the publicity his relationship with Tonto Dikeh.

When asked on how he feels about the controversial publicity his relationship with the actress is getting, Olakunle Churchill said:

“At first l was bothered but later the whole scenario became a movie script, where the executive director, is the producer, script writer and actor all in the name of bringing down and tarnishing the image of your ex, to the extent that people who were not part of our marital plans or who were not even in the know of our marital issues were hired and cajoled to concoct lies against me. She claims to be the bread winner of her family. Is she the Nigerians President’s daughter?” 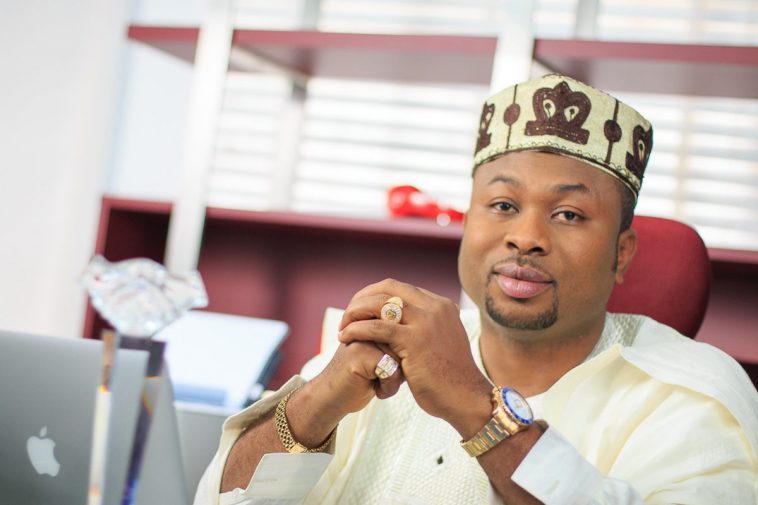 “You mean squatting? This is ridiculous. Before I met the Nollywood actress, Tonto Dikeh, I was already one of the most successful young millionaires in Africa. I met her at a night club, during my brother’s birthday party in 2014 and it was about the same time I acquired the latest Benz cars. Three months after we met, she got pregnant. I have never really stayed in Nigeria for too long, because I do business in Ghana, although I have an office at Ikoyi. She visited me in Ghana several times and when she broke the news of her pregnancy three months into the relationship, I decided to visit her in Nigeria. I had to visit her often, because she was carrying my child.

I have never squatted or lived with her and the only time we stayed together was after the birth of my son, which came with the approval of her parents, after I had completely satisfied the traditional requirements for her dowry. I flew her to the United States to deliver my child in one of the best hospitals in America. She stayed at my family house in London few months after delivery, before she returned to Nigeria. On her arrival, I had already prepared a well-furnished exquisite apartment for us – this was the first and only times we lived together until the divorce. We only lived together for six months.

Still on the issue of squatting, it will interest you to know that Tonto will never marry or date a man who lacks prospects or is unsuccessful. She likes to live the life. We broke up in 2016 at a house I newly acquired for my mother in Lekki, Lagos State.

Our marriage was plagued with several frivolous claims of falsity, ranging from domestic violence to false allegations and all what not. I never laid my hands on her. I have never done that in my life before. She made up those things to discredit my philanthropic works. I am from a proper disciplined Yoruba home.

I was well trained and brought up under the fear of God.
Marriage isn’t by force and so I encourage the entire public to shun the baseless sponsored social media propaganda which the actress has continued to fuel. It would eventually settle in the water-low.

It was recently reported that Tonto Dike was granted full custody of your son. Is this true? Well, that was a sponsored publication from a cheap blackmailing blogger. It is not only false but absolutely misleading. Following an in-dept investigation by my legal team, it was revealed that there was no such judgement granted as the fake information which emanated from one blogger ‘Cutie Juls’, was a desperate move to defame my personality. This has been a continuous occurrence in the past three years to blackmail and justify the bidding of her paymaster.
It’s important to note also that my legal team has debunked and discredited the false publication of the alleged judgement by a customary court in Abuja granting my ex-wife full custody of our son. This was made known through an official disclaimer that stated that the frivolous report was just a mere attempt to distract me and create baseless relevance. Interestingly, the standing court judgement ordered that all documents of our son must bear the father’s surname by right and that the international passport of King Andrea must be kept in the bank and shall not be released except with a written consent of both parties. But she violated the court order by fraudulently obtaining another passport for my son bearing her surname to fly the little boy outside the country. This illegal acquisition of fresh passport for King Andrea with ‘Dikeh’ as a surname, is not only illegitimate but against the instruction of the court.

The public is by the disclaimer of my lawyers advised to disregard the fake news making the rounds on social media about the full custody of King Andrea Churchill granted by the court as it’s not only misleading but geared towards scoring cheap social relevance.”